After several years spent holding down the drum stool with legendary doom metal acts Angel Witch, Electric Wizard and Warning – not to mention the prog rock bands Zoltan, The Osiris Club and Suns Of The Tundra – Andrew sat down with his keyboard collection, a 4-track recorder and a selection of sonic screwdrivers to create a new kind of music.

The space-rock jams contained on 'Ancient Paths' are influenced as much by retro synth artists Kraftwerk, Heldon, Tubeway Army and OMD as they are by the sci-fi soundtracks of John Carpenter and the folk-horror that seeps into every corner of the British Isles. Andrew's previous experience in live-soundtracking silent films (performing at Stewart Lee's ATP Festival with Suns Of The Tundra to a 1919 film detailing Shackleton's expedition to Antarctica) and reworking vintage horror scores with Zoltan guide the expansive, all-instrumental melancholy of the record. Acoustic guitars, analog synthesizers and electronic percussion coalesce into a retro-futurist soundscape for the mind's eye.

Many of the songtitles reference occult literature and cinema: Fritz Lang's Metropolis ('Rotwang's Furnace'), Phantasm ('Morningside'), H.P. Lovecraft's Colour Out Of Space ('Blasted Heath'), the comics of Jack Kirby ('Kirby Oberon'). The band name itself is a nod to H.G. Well's classic 1895 novel 'The Time Machine'.

The Wind in the Willows recast for the 22nd century? Quatermass and the Pit relocated to Summerisle? The music of Morlock bridges the past and the future, re-imagining both into a blend of electronic perfection. 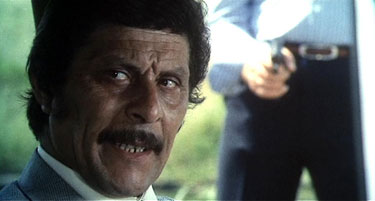 Originally issued in 2011, Ashcan Copy is the third instalment in Rashomon’s Film Music series of LPs. Cineploit Records is proud to present this re-release, and to introduce the

record to a wider audience than the 150 lucky souls who snagged a copy of the ultra-limited initial release on Hlava Records.

Active since 2009, Rashomon is the solo project of Matt Thompson, also of Cineploit mainstays ZOLTAN. This is his second release on the label under the Rashomon name,

The previous edition to this, 2009’s The Finishing Line: Film Music Vol. 2, had focused on re-creating the psychological mind-state of the wilder end of 1970s British public information films. By way of change Ashcan Copy is presented as an album of soundtrack cues fromfilms that were, for one reason or another, never released. The films, hailing from Italy, Japan and the USA (among others) supposedly date from the 1950s to the 1970s, and were (according to the extensive sleeve notes) exactingly sourced from film archives across Europe. In reality, all the music is self-composed. The eight tracks include elements of noise, folk, psychedelia, prog and noir-jazz within their elaborate constructions, created with a panoply of instrumentation including Mellotron, zither, home-made percussion, Fender Rhodes, harmonium, MiniMoog and more. Delicate and sensuous, heavy and oppressive – the record negotiates these musical contradictions while retaining a single-minded pursuit of strangeness and surprise.

Having finally found its spiritual home on cinematic specialist label Cineploit, Ashcan Copy can at last be heard by all.

LAWA is the acronym for the duo of Austrian soundtrack wizards Alain Leonard and Alex Wank. Once again they are honouring the world of film music in their idiosyncratic, very personal way. After their first Cineploit release, "Omaggio a Lucio Fulci and Fabio Frizzi“ (Exploit 02, 2012, Vinyl only) and the follow up, "Omaggio a Riz Ortolani“ (Exploit 06, 2015, Vinyl only) LAWA now takes a ride through the furthest reaches of '70s and '80s French and Italian cinema. From Michel Colombier, Michel Legrand and Jacques Revaux to Alessandro Alessandroni, Daniele Patucchi, Nico Catanese and G & M de Angelis, every base is covered. And, of course, not to forget the Master of them all: Ennio Morricone (RIP).
These very special tracks have been renewed in LAWA's dark electronic style, proving without a doubt the high-level craft of the composers extraordinaire that created them. Some versions are close to the original, but others have acted as springboards for new ideas and creations.
This release is probably LAWA's final reinterpretation of classic obscure film scores, as Messrs Leonard and Wank are creating more and more of their own atmospheric soundtrack music for documentaries, shorts and feature films - hopefully soon to be released via Cineploit as well.
Now take a deep dive into this dark ride through European cinema, brought to you in the inimitable LAWA way!

Un Homme est Mort
(aka Brutale Schatten * The Outside Man)

Revolver (Versione 2019)
(aka Die perfekte Erpressung * Blood in the Streets)

Four years on from the debut album “Cinematic Lies”, the second release from SOSPETTO founder Christian Rzechak under the PAN/SCAN alias is heading your way. Inspired by old-school synthesizer soundscapes of the Berlin or Düsseldorf school, but with an atmospheric modern feel added, KOSMONAUTER is a pure electronic science fiction soundtrack to guide your dreams. Reminders of composers such as Jóhann Jóhannsson, Cliff Martinez or Steve Moore are quite intentional. The fusion of retro-futurism and contemporary electro-ambient innovations takes you on an exhilarating aural trip into the darkest, furthest reaches of infinite space!

Who is the KOSMONAUTER? What is his mission? Does he defend us against danger or is he a threat himself? The six tracks on the album tell a story, but where this journey goes is up to the listener. The track titles hint at the true meaning, but who can interpret them? The KOSMONAUTER will invade your head; and, maybe, you will lose your mind...The KOSMONAUTER: Redemption or Apocalypse?